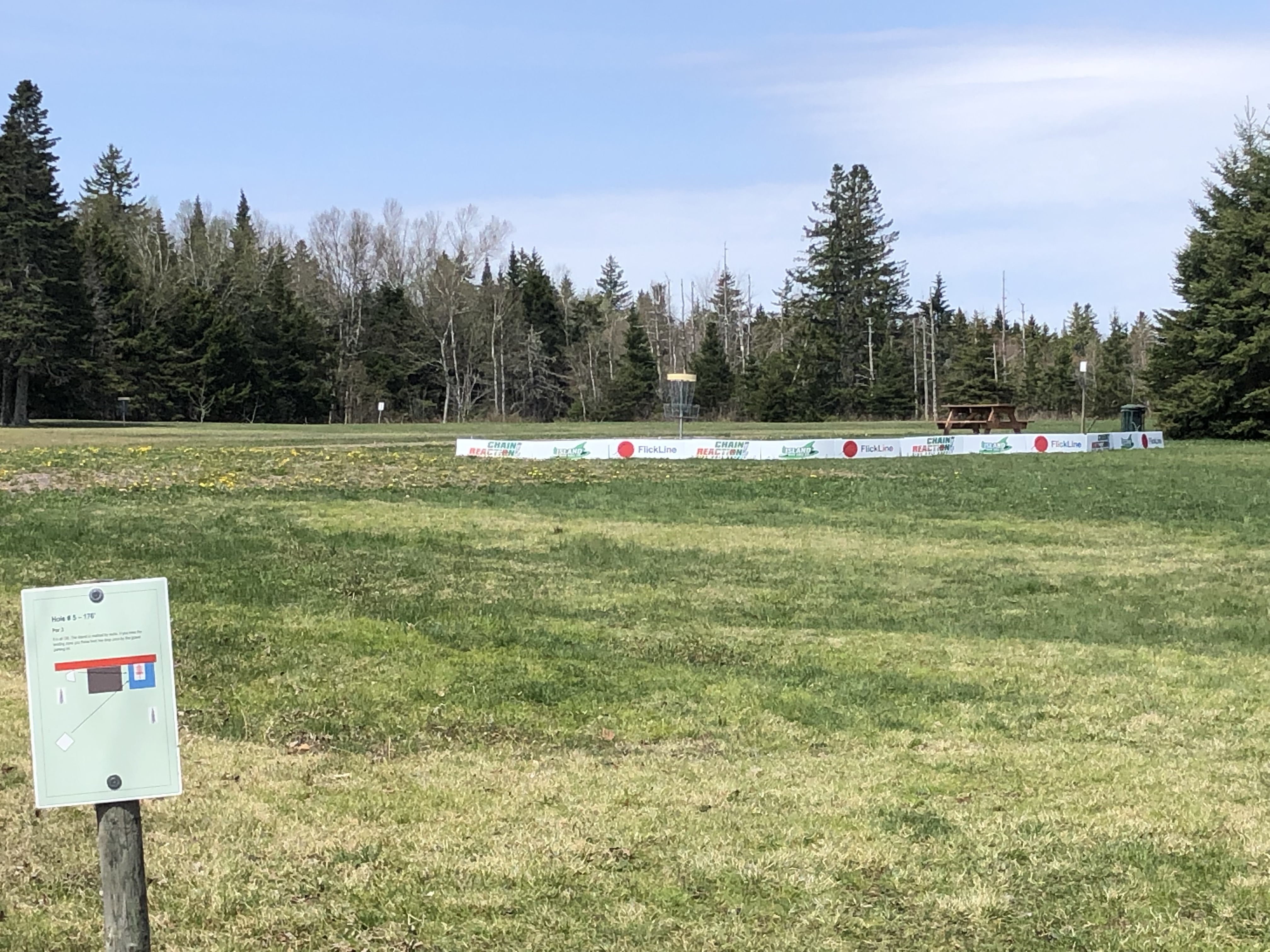 It really is the simple things in life that we should celebrate: quality time with people we enjoy, sunshine on a May day, and no wind on the Tantramar marsh. It only took three days of wonderful disc golf to restore order in our part of the universe. It was only fitting that the annual kick off to the FlickLine Tour once again returned to the site of its historic opening venue, Beech Hill Park. This course is the first public disc golf course created by Ben and Duncan, and an event that has been running in some fashion for over a decade. We've come a long way from the days when we used to hump baskets into every corner of the park and create the course a few hours before a dozen or so of us played it. This year was truly something worth savouring, for so many reasons.

First off, we had a complete sell-out of 106 players, three savvy TDs, and a whole cast a characters who contributed to the whole experience. After years of running events, we have found people who excel at what they do and happily made them an ingrained part of the secret sauce: Chain Reaction Disc Golf knocked the disc selection out of the park; Tiny Changes Disc Golf brought along "Connect Fore" to give us that festival feel; Luc and company supplied us with music in the air and warm hoodies on our back; and the Disc Golf Dummies were on hand to capture some of the magic on film. It felt like the before times...but better. It could be that, in my old age, I am just now starting to wax poetic about the things that make you smile, or maybe it's just that after two weird and sometimes soul-crushing years, it was just nice to be together with the sun at our back and the baskets in our gaze.

If the rest of the 2022 season is going be anything like Sackville, we are in for a real treat.

But back to the actual weekend at hand. For those of you who are unfamiliar with the course at Beech Hill Park, it is a throw back to the days of old course building. Days when municipalities gave you just enough money to cover the cost of the baskets and maybe the signs, and you threw everything in the ground without cutting any trees. Despite being underfunded, this course was never under-loved. So many of the key figures in the Maritime disc golf community have made this course a staple of their play. It is a perfect blend of six really tough-to-par holes, six holes you feel like you HAVE to birdie, and six holes that could go either way. We have had 1000-rated players play here, and give it glowing reviews; we also have 70-year-old players and retired couples who love it just as much. Combine these aspects with the fact it is only seconds off the highway, and you have every reason to make a round at Beech Hill a priority every time you drive by.

For the event itself, we had a bevy of things that are worth celebrating. Even after almost seven full years of a mostly unchanged course, breaking par is still a tough thing to do. Lots of players made the opening weekend pilgrimage early this year and practiced the tournament layout on Friday. With more players playing comes more amazing shots. That was in full display with four aces over the ace days. Two were hit on Friday (holes 2 and 10) and another two in the actual event (holes 5 and 15). Despite having a drastically reduced wind over the entire competition, nobody could bag the Top Link 2K ace on the extremely approachable hole 6. There will be stories told of close shots here for sure, but none closer than that of Brandon Crawford. On Sunday, after having already aced hole 15 the previous day, he stepped up and hit full band on the the 2K hole. Despite being only inches away from such a sweet payday, he came out of it with only a birdie to show for it. Still not a bad showing.

The divisions all featured great races.

Some like FA2 (Lindsay Pattison), MA50 (Donnie Desroches), and MP40 (Greg Ericson) were not super close, but competitive all the same. Despite not coming down to the wire, they were all filled with moments of up and downs.

MPO was a bit closer than it may look on paper but ultimately the laser focus (and laser putting) of Nathan McCarthy was just too much for the rest of the field to take down. It was three fantastic rounds to witness if you were so lucky.

As with every event there were some very competitive divisions starting with FA1. Tanis Trainor, the Top Link sponsored and all-around disc golf go-getter, was once again crowned victorious after a come-from-behind victory that saw her play 2 over par for the final 15 holes of Sunday. Six of her 21 over-par strokes occurred on hole 3, but despite that, she was able to shake off those bogies and come out on top. Nine women (or more) playing in the FA1 division is something we hope to see more often, and a full 12 women overall is something we would love to see a lot more!

MA40 also saw a come-from-behind victory for Jody Wagstaff. Jody picked the perfect time to play his career-best round at Sackville, shooting an impressive -3 on Sunday to claim the trophy over PEI's Mitchell Murphy.

However, the real magic of the day was reserved for the youth.

In MA2, there was an amazing finish. Coming into hole 18, it looked like the FlickLine Tour might play host to its first ever three-way playoff, but instead, the 15-year-old Oliver Murphy parked the tricky hole 18 to come up with a birdie and take home his first ever PDGA tournament win in a non-junior division. The feat was made even more impressive by the fact that Oliver shot a full 114 points better than his rating over the three-round event. Nothing makes us happier than seeing so many kids so invested in our game, and then seeing that investment rewarded.

This week's feature story belongs to the newest member of team FlickLine, Dylan Goudy (full disclosure: Dylan was offered a FlickLine sponsorship before his win; we were just waiting to announce it!). Forgive us if you have already heard Dylan's story, but it does bear repeating the highlights. Not unlike many other people, Dylan found disc golf during the start of the pandemic through the magic of YouTube and Brodie Smith. What is drastically different for Dylan than for most other people is that, despite seeing the game and being interested in it, Dylan had no courses within 2+ hours of his home. So, Dylan did the exact opposite of every other disc golfer I have ever met... he did nothing but practice for a long time. Several people have stories now that will only grow in legend of their first time meeting Dylan. He is quiet and unassuming. After six or seven times meeting, and even playing a full round with him, you might not hear him talk once. He isn't more than 5'6" and modest in his demeanour, but on the course, he is a cold blooded killer. The tournament crowd around here has all witnessed one of his perfect backhand laser beams to the basket 300 feet away and his form is as close to textbook as you are going to find... oh, and did we mention that he isn't even 16 years old yet? His -6 for the tournament would have put him in the cash in MPO, and his 952 tournament average was 23 points higher than his rating. Obviously, a lot of credit needs to go to his parents, as a kid of that age can't even physically get here without their help and support. Dylan shot a blistering -4 on the final round. On the very first hole he needed to can a 45-foot putt to save the par, and can it he did. It turns out practice helps and no new player needs to look any further than Dylan Goudy for proof of that.

Overall, the weekend had everything that you want to see in a competitive disc golf event, especially the celebratory feeling we have been missing for a few years. There was the usual drama, and highs and lows for everyone.

The tour standings are now updated here and we are very excited to see all the great things that this disc golf season has in store! We will keep you posted on news and notes.