Building on the rock 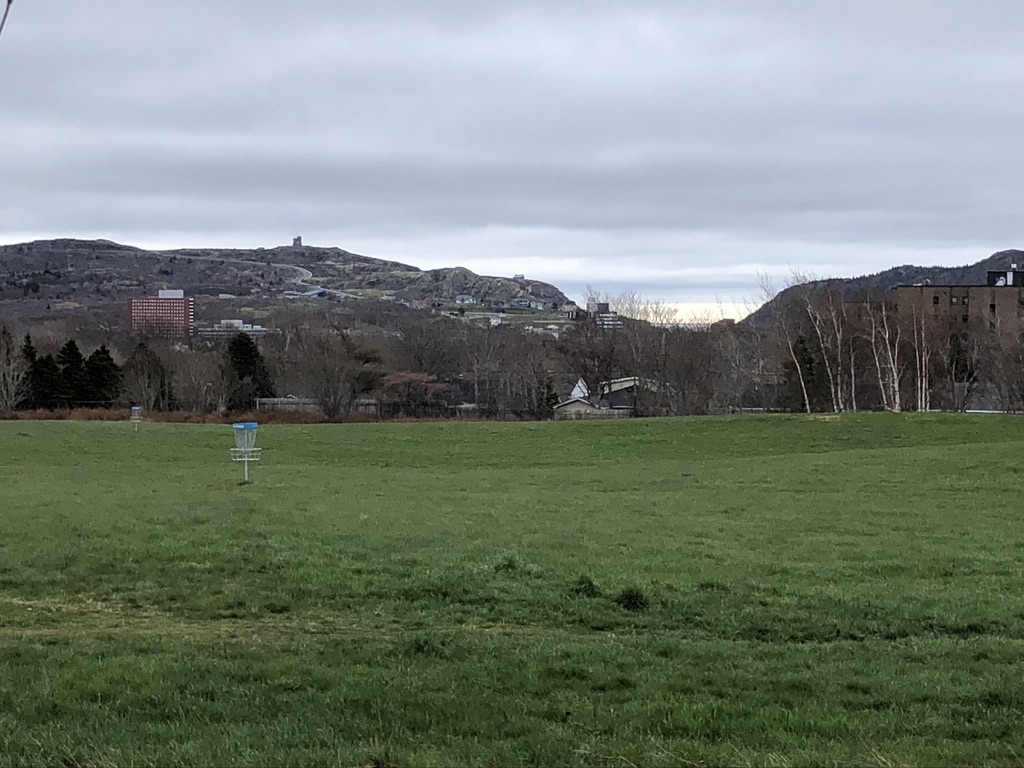 First off, let me start out with some gratitude. I am thankful that, despite the less-than-ideal times we find ourselves living through, I am able to still work safely. I wouldn't be able to do that without the ongoing love and support from my family who empower me to do such wonderful things, and the opportunities provided to me by the wider public. It is impossible to fully express just how much I love my job, and, because of that, it is important for me to give thanks as often as I can for all the things that have made this opportunity possible, even if it does induce more than one eye-roll in the process.

But enough about me, let's get to the good stuff: Disc Golf in Newfoundland!

This week I planted the most easterly baskets in North America. I know these baskets won't actually grow but the people around them will. The baskets pictured above (with Signal Hill In the background) will be the first ones on our continent to greet the sun every morning. There is something in that image that fills me with warmth every time I focus on it. That warmth is doubled when I think about how quickly the community of St. John's embraced those baskets as their own.

If you have been to Newfoundland, you already know how genuine and welcoming the locals are. If you have not been there, do yourself a favour and make the trip, then make it again as often as you can. This particular voyage for me brought me all around the circle to St. Johns, the provincial capital, located on the far eastern side of the island. It is a vibrant and colourful town filled with windy streets that have been carved out of hills made seemingly out of solid rock. It is home to multiple universities, colourful pubs, and all the amenities anyone could want in a city. It also has quite possibly the nicest people in the world. To say they were ready for disc golf would be a massive understatement. This particular work trip came about after months of consultations with a local Ultimate player who saw the need for a disc golf course and, like all good project managers, he envisioned exactly how disc golf could fit in and thrive in the local culture. He and his crew were diligent and detailed. They formed an association, solicited grants, and spread the word throughout all the communities to which they had access. It turns out his vision was spot on. Within only a few hours of me first stepping in the park, I had set up flags around the space which marked the potential course. At lunch that day, a group of five stopped by and played the flags. It wasn't hard to see something special was happening.

When you see people that excited, it makes you want to work twice as hard. By the end of the first full day, eight baskets were installed. Ten rounds were played on those eight baskets. By sunrise the next day, all ten were in and before 8:00 AM, we had players arrive at the course. One of the downsides to our current COVID-19 situation is that we can't host opening day events in our typical celebratory manner, so this course "opening" was meant to be low-key, and the course itself was built to allow the local players a simple place to play during the pandemic. With public health in mind, we had made a plan that I would come, work by myself, and get the course into an open and playable state for anyone lucky enough to live in St. John's to enjoy. When restrictions lifted in the summer I, and many other FlickLine players, would make a return visit to Newfoundland and officially open up the course. Within 12 hours of the last basket being buried in the ground, over 40 different people came to play the course. For many of these people, it was their first time ever playing disc golf. Almost all of them played multiple rounds. By the time 36 hours had passed, those numbers had doubled. It would be easy to assume that many of these players were "come-from-aways" who knew about the game before, or Ultimate players looking to cross over, but that was simply not the case. Local families and neighbourhood kids made up half of the playing population. Every reaction by dog walkers, neighbours, and the general public was positive and genuine. A local Play-it-Again store even started carrying a selection of discs, and by 10:00 AM on the first day, that store was already seeing them fly off the shelves, so much so that a second order was placed by Monday morning.

There is not a metric I have available for me that could make this course feel more successful. Although the course is simple in its design and modest in its features, it's a perfect fit for this time and space. There is no question that this course will be the foundation that grows the game on the eastern part of the province.

After three full days of working in St. John's, I packed up the cube van and headed west for another breathtaking drive through wind-swept mountains and oceanside vistas. No trip to the Rock is complete until you see your first moose. On this day, I was treated to many moose sightings, including a rare albino moose (I have the pictures!) that I spotted just south of Bishop Falls. Maybe it was my spirit animal, or maybe it was just signs of good things to come. Either way, I knew I was on the right path.

On the western side of Newfoundland, growth has already taken root. In August of 2020, FlickLine was fortunate enough to build the first basket course in Newfoundland. (We have since learned that there is a private obstacle disc golf course in Newfoundland, so we will stop saying it was the first disc golf course in that province, and after having met the owner, we are excited to play it on our return visit.) The Blanche Brook Park is located in the lovely and scenic oceanside town of Stephenville. It offers a healthy selection of shots, and uses almost all of the variety of trees and features the park has to offer. The town's scenic views, kind people, and gem of a course make the trip off the highway more than worth it. In the first nine months of being open, the course has been played almost 3000 times on Udisc making it one of, if not the most, played course in Atlantic Canada. This may be in part to an overrepresentation on Udisc by a small but very devoted group there who tracks every round. Regardless of that fact, the course is being played so much that an expansion is in the works. Nine more holes were designed in an adjacent park to give Stephenville a 19 hole layout. Just for good measure, we scouted out the location for the championship course that my gut tells me will be built in the not-so-distant future. Not only does Stephenville boast a healthy disc golf community and a overwhelmingly positive atmosphere, it is home to a future national champion. One player in particular has become an avid student of the game, and will rival all players in his age group for years to come. He plays with passion and putts without fear; what more could you ask for? Don't be surprised when you see the Newfoundland flag flying high in recognition of their local players' future successes.

Although this most recent trip to Newfoundland only lasted five days, the memory of it will be imprinted on my heart forever. There is an overwhelming sense that the world is a beautiful and positive place when you visit somewhere like Newfoundland. Part of my ongoing quest to bring disc golf to as many places in the world as I can has been satisfied just a little bit more after this week. By the time Team FlickLine arrives in Newfoundland in July, I can only imagine the heights to which the locals will have taken the game. I feel like I did my small part to reach back and throw; now we all get to watch it fly.

Do yourself a favour, and make the trip to Newfoundland at least once in your lifetime. I promise you that you won't regret it.