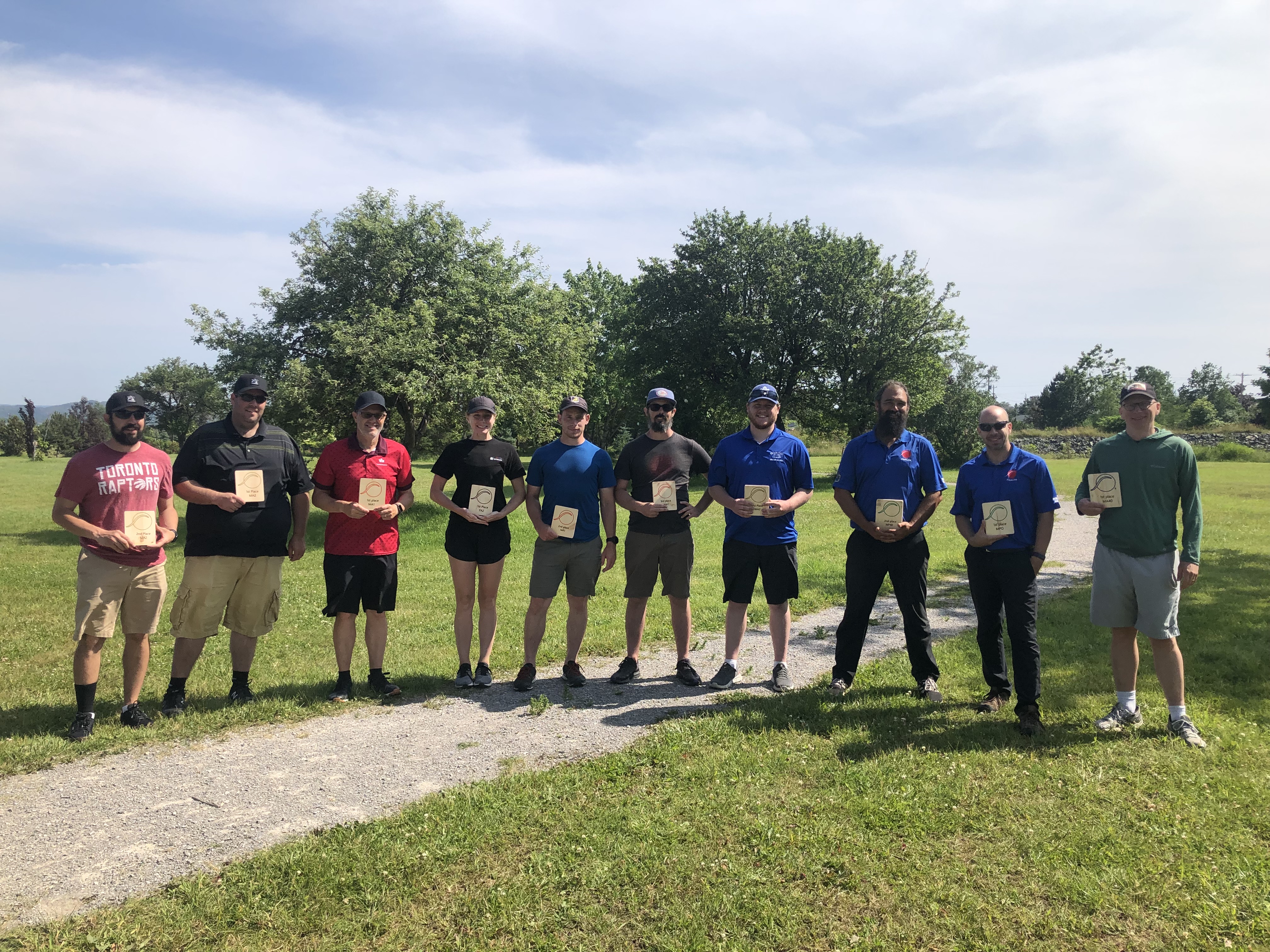 I promise I won't spend the entire length of this article selling you on all the beauty of Newfoundland, but just know I could. Sitting here with the sun going down, back in the province of my birth, it’s hard to know if my recent trip to Newfoundland will be a blip on the radar, or a life changing moment that forever changes my future and helps shape the entire Atlantic region for years to come.  I am temped to say it is the latter, but then, at heart, I am always an eternal optimist.

If nothing else, my family and I spent ten glorious days dividing our time between disc golf, scenic hikes, culinary delights, and soaking in the rich fabric that makes up the tapestry called Newfoundland.  During the entire stay, we were spoiled with hosts who showed a keen desire to show off their homeland. We constantly met with people who were eager to share a story. It was everything a traveler would need to fill their wandering spirit.   Not only that, but there was disc golf too.

This trip was bookended by two events, the first ever PDGA events in the province, in fact.  Stephenville kicked off the official disc golf season in Newfoundland.  It was only fitting that it happened there, since it was Stephenville that built the first course.  The event was an overwhelming success: 23 players registered and played the official event, but eight more players logged rounds when their schedules would allow it over the course of two days.  It was a perfect mix of locals and come-from-aways--some of whom came to town from off-island.  In the end, the locals won two of the five divisions, including the soon-to-be island famous (if he is not already), Darrell Chipp.  The same man who has logged close to 800 rounds in a little under a year and has already landed ten aces.  The weather on event day baited us into a feeling that the sunshine would never go away, and from our view, the entire world was feeling right. Each division in Stephenville had a healthy level of comradery and competition, something that would be a common theme throughout the trip.  For many people, this was their first ever disc golf event.  We were lucky to have Chain Reaction Disc Golf make the trip, and give it that real tournament feel with a booth set up full on shiny new discs. The day went smoothly, and for the first time in a very long time, things felt like the old normal. Fists were bumped, laughs were shared, and a warm little crowd hung around until the end to talk disc golf. It was, without a doubt, a perfect day.

If you are unfamiliar with the geography of Newfoundland then you may not know that Stephenville is located on the west coast of the island, surrounded by weathered mountains on three sides and the wild rugged ocean on the other. The coastline is often both breathtaking and terrifying, with rocky cliffs that fall straight off into a restless Atlantic Ocean.  On one of our free days, we hugged that coastline north of town to explore "Hidden Falls" and "The Boot." A forever moment of mine was burned into my memory as the sun shone diamonds on the frigid Atlantic Ocean, and the operatic sounds of Kim Harris sang out from our radio.  A deep-seated satisfaction blanketed us all for the rest of that afternoon. A warm cup of chowder in our bellies after the hike completed the journey like the cherry on top of the milkshake.

A few days later, we were in Gros Morne.  As with many of my trips, this part of the voyage was a mix of work and pleasure. Although we were greeted with the sun on our arrival, the clouds and fog would blanket us the remainder of our stay. It prevented my wife and kids from getting to take part in an epic boat tour, but otherwise it did little to dampen our spirits.  We hiked a few family-friendly trails around Rocky Harbour, and I spent a magical afternoon exploring trails around Lobster Head Cove until a sudden downpour had me sprinting for the car. Up until then, I had been feasting on berries and exploring every possible pathway that could be walked down, immediately falling in love with the weathered trees that make up the oceanside forest and wondering how many storms they had withstood in order to become so gnarled.  Each one told me a story of resilience that sparked some part of my inner child. This will not be the last time I hope to explore this park or put my hand on these trees. Each time I intend to walk a little further up the mountain to see the other side. The picture below is what the locals told me was the "worst" view I would get from the trail.

Eventually, we meandered our way to St. John’s, the island's capital city, and home of its largest population. Its rolling hills and jellybean-coloured houses have been the feature of more than one beautiful photo. The naturally guarded harbour and streets that engulf it have laid eyes on an equally colourful history.  George Street alone could tell stories to last a lifetime. The explosion of craft beer has rarely had a more welcoming crowd than the one in Newfoundland. If there is anything the people there love more than telling good stories, it’s telling them while drinking a great beer. Each one of our nights was capped off with just this scene, either in our house or someone else’s.

Last year, when I opened the Stephenville course, I claimed it was the first disc golf course in Newfoundland. Little did I know that this title had already been claimed by a local who built his own private course with his father in Torbay. Lucky for me, he forgave me for making the false claim, and invited me out to play his course. It was another unique experience that you have to play to believe. His course is called "Nail to Sail," as it features a large sail that marks the 9th and 15th holes. It is gorgeous in every way imaginable. The homemade baskets blend perfectly with the spectacular views and well-kept gardens that spill to life during the fleeting summer months there. Often, whales are visible from this site. This course should really be on your bucket list, and the fact that it is owned by yet another set of unbelievably wonderful people makes it a dream to play.

During our stay in the city I saw and heard some amazing things. I heard a man described as having a neck like a "meat bucket." I saw a grown man show up to a party and eat a full bag of chips with chop sticks he brought from home, specifically for this purpose. I saw a collection of the most wonderful dogs you could ever imaging including a Hungarian Sheep Dog, pictured here: Komondor Dogs. I even walked into a store where Disc Golf Dummies was playing on a live screen. Nova Scotia now has famous disc golfers!

I felt right at home surrounded by at least one more person who randomly talks to strangers on the street without the slightest hesitation. Every day was filled with stories. The culture of keeping the history of the island alive through the oral tradition is thriving, at least in the company we kept. As far as my traveling party was concerned, we had the best storyteller and guide a person could hope for in Mr. Nick House. A true "bay boy," Nick embodies all that makes Newfoundlanders so unique. A long time outdoors man--partially by nature and partially by necessity--Nick is new to disc golf, but not to disc sports. He is a strong and skilled organizer who has done wonders for the Ultimate Frisbee community in Newfoundland, and despite being the second-best Ultimate player in his own household, was recently recognized by Sport NL as a finalist for the Executive of the Year Award.

Nick's real genius lies in his ability to connect to people. Nick is a project manager and, by all accounts, a good one. He values relationships and people, and attacks problems from the "work smarter, not harder" viewpoint.  I know I am not alone in saying that I could listen to him tell stories about growing up in Daniel's Harbour all day long (although I admit for at least a week I thought he was saying "Dangus Harbour"). One of the best-loved tales is that of the landslide in Daniel's Harbour in 2007. This catastrophe was enough to get all of the able-bodied boys out of school for an afternoon, and despite being only inches from their deaths, it seemed like a good bit of time spent. I didn't realize just how much joy I had been missing from talking to new people face-to-face during the pandemic. All of Newfoundland seemed to be in a good mood, and we were lucky to find ourselves in the heart of this joy on this trip.

By the time we got to the event in Confederation Park in St. John's, we could tell it was going to be a good one.  The locals were out in strong force playing the tournament course that we had constructed.  A few extra holes were put in place, some added OB, and an island hole, all gave the course that real tournament feel. Once again, Chain Reaction Disc Golf joined us to give out prizes and show off a wide variety of plastic for all of those folks who wanted to grow their bag.  Just like six days previous in Stephenville, we were treated to a breezy and beautiful day, with sunshine and blue skies.  The competition was even more tightly packed, with every division except one going down to the wire.  We had a strong showing of women who made up about 22% of the field. For the vast majority of people, this was their first experience with a PDGA event. From what I could tell, most people left happy.

After the event, we spent 36 more hours on the island. We went whale watching, hiked the Signal Hill Trail, and were met at the top with a full blanket of fog. It could not have been better. Our last bit of time in Newfoundland was spent walking the coastline and rock-hounding before having lunch at the Three Sisters Cafe in Argentia. A lovely version of Joel Plaskett's Love This Town played during our last hours there. In the end, Newfoundland was everything we hoped it would be...so much so that I am already planning my next visit.