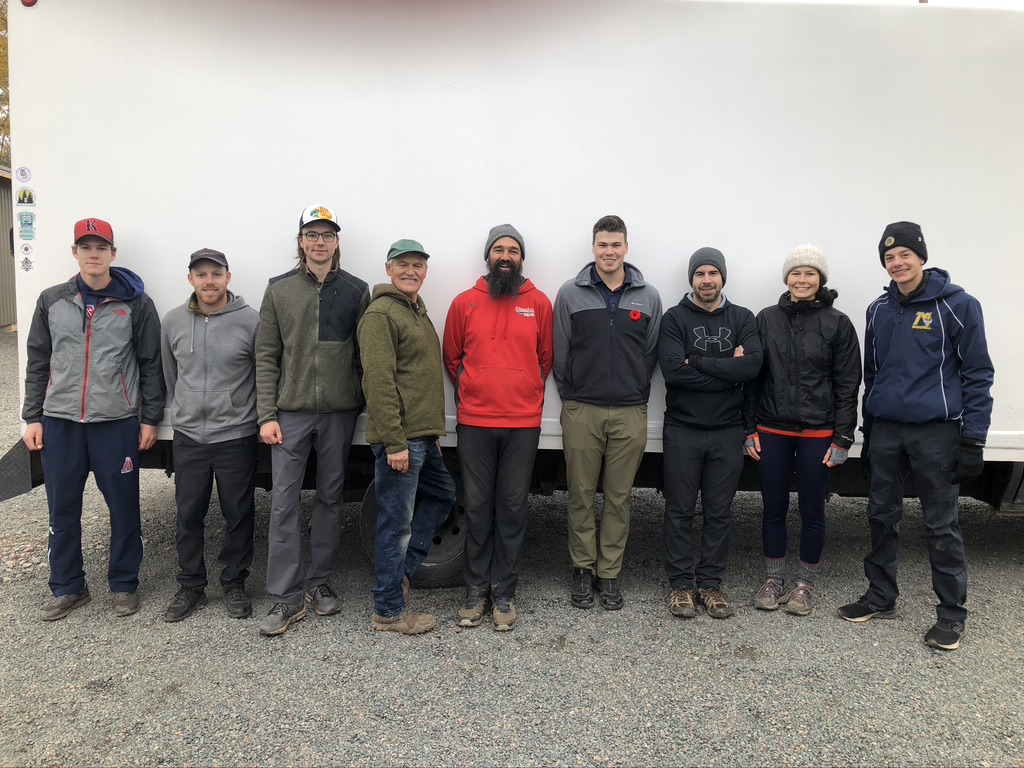 You probably noticed we start off many of our posts being excited about the future and this post is no exception. Part of building this company came from the desire to help our local players feel more supported, to get them comfortable playing big events, and to find ways to help them play in more places.

Our team is made up of wonderful humans who carry themselves with dignity and respect both on and off the course. We have tried to support people in many regions all across Atlantic Canada and in a wide array of divisions. We don't pick players solely on winning, although we believe each of these players are wonderful athletes capable of winning any event they enter, instead focus on supporting players who show a commitment to making themselves and the people around them better. We wish we had enough time and resources to back even more people but for now we are happy to be able to support these ones.

With all that being said it is our sincere pleasure to introduce to you our 2022 Flickline Sponsored team.

Antoni Richard - Antoni is the youngest player on our team and one of the lucky people who will spend virtually their entire life knowing about the game of disc golf. Aside from playing disc golf Antoni is an avid basketball player and official (hockey and basketball). Antoni picked up the game of disc golf at the start of Covid when he was 13. A little over 2 years later he won the Jr. title for the 2021 Flickline season tour and even put an MA1 win under his belt at Rose Valley last year. Don't be surprised when you see Antoni picked up by a bigger disc golf company (he can share those details with you soon). In his own words,

'If you're looking to challenge yourself mentally, this sport is the bomb.  I just hope more kids my age will pick it up and can’t wait to see what steps I can take with Flickline to further my progression and see where this sport will take me in the future years.  Come join me for a round.'

Dylan McCarthy - Dylan is one half of our twin power team. Originally from Coldbrook NS he is another one of Bushwackers and among the lucky players who get to call New Minas their home course. Dylan has a deep love of baseball and still plays on the senior circuit in NS.

Nathan McCarthy - Nathan is the other half of the twin power team. Just like his brother he grew in Coldbrook but now calls Berwick his home. Nathan splits his disc golf local rounds between Waterville and New Minas but is still a Bushwacker at heart! Again, just like his brother Nathan has a deep love of baseball but found a hidden passion in disc golf. You may have read Nathans name in some of our write ups last year as he put together some of the most outstanding rounds of the season in 2021. Both of the McCarthy boys are real gems to have around, and once you've met their dad you can see that the apples didn't fall far from the tree.

Alan Phippen - Alan was originally born in England and moved to Nova Scotia with his wife. As a lifelong soccer (football) fan he knew he would need a new hobby when he arrived here. After a chance encounter watching the Iron Leaf 3 years ago it became clear that disc golf was going to fill that void. Alan rounds out our New Minas / Waterville / Bushwacker group.

Duncan Maclean - Duncan is a tall drink of water with a cannon for an arm. He is part of the youth movement here in Atlantic Canada that is seeing more people in their 20's pick up the game. Originally from Cambridge NS Duncan has recently graduated from Acadia University with a BSc in Chemistry. He started playing disc golf in late summer of 2019 and grew to love the sport both as a competitive and recreational activity. Playing on his home course at New Minas he is a proud member of the Bushwacker Disc Golf Club.

Lysiane Soucy - Lysiane (Lily) is originally from Montreal, QC but has called PEI home for 5 years. A former standout ultimate player and now full time high school teacher she fell in love with disc golf 3 years ago. By here own high standards she did not have her best season last year but still competed well enough to take home the FA1 season title. In here own words,

"I feel incredibly lucky to call Hillcrest my home course and I hope to contribute to growing the women's disc golf community in the years to come."

Andrew Clark - Andrew will be playing on Team FlickLine his second year in 2022. Playing in MA1, 2021 was a successful year for Andrew winning FlickLine tour stops at Sackville and New Minas and finishing the season as the tour points leader. In 2022, Andrew will be playing his local events in the MPO division but plans to travel to tournaments in BC, Ontario, and New England where he will play in MA1. Andrew lives and works, as a GIS programmer analyst, in Charlottetown, PE. Inspired by his home course at Hillcrest, Andrew has a keen interest in disc golf course design where he’s able to apply his expertise in geospatial technologies. Recently, Andrew has co-founded DesignIt Disc Golf, and has courses under development in PEI at Belfast, Glenaladale House, and his own course in St. Peters Bay. Stay tuned for 2 more DesignIt courses coming to NB in 2022.

Chris Richard - Chris, a born and raised islander, was fortunate enough to be introduced to disc golf in 2011 as Hillcrest Farms Disc Golf course was being built. Chris was hooked from the first throw and hasn't looked back since. Chris enjoys playing in tournaments near and far and is looking forward to representing Flickline Disc Golf agin in the 2022 season. When Chris is not playing disc golf, he is designing and building escape rooms for his business in Cavendish, PEI.

Nick Martin - Nick Martin, pdga# 105723 is from Dieppe, New Brunswick and is a part of the "Dieppe Disc Demons". He fell in love with the game 4 years ago the minute he touched the disc and has never stopped playing since. Nick has always been very competitive in all the sports he's played and disc golf has allowed him to get to the next level. In his own words, "Go team Flickline!"

Matt Sullivan - After playing ultimate frisbee for 18 years, Matt first tried disc golf when the Dieppe course opened in 2017 and instantly was hooked.  Winning some MA2 tournaments in 2018, having a harder time in 2019 while trying to break old ultimate habits, Matt has found success in the MA40 division the past couple years and is working hard on all aspects of the game to make the jump to MP40.

Nathalie Deveau - Nathalie first tried disc golf when the Dieppe course opened in 2017, but continued to focus on playing ultimate frisbee.  When the pandemic shut ultimate down, Nathalie gave disc golf another shot and eventually grew to love the game.  In 2021 she started to practice and focus more energy into it and ended up winning tournaments in FA2 and FA1.  She hopes to keep improving her game in 2022 and help grow women’s disc golf.

Darrell Chipp - Darrell Chipp is the first Newfoundlander on team Flickline. It's very fitting since Darrell was the first player from Stephenville to fully fall in the love with the game. Darrell is an outstanding athlete in several sports including tennis, table tennis, pickleball and has been a scratch golfer for several years. Darrell is deeply devoted to the game of disc golf and has been instrumental in helping Stephenville get a second course in the ground already. This year he has his eyes set on a National Championship.

Duncan Dixon - I am sure most people know by know that Duncan is one of the original pillars of disc golf in Atlantic Canada. He was instrumental in getting the Beachhill course (his home course) in the ground as well as several other key initiatives throughout the Maritimes that have helped get us where we are today. What people might not know is that he has been playing 23 years, is a Capricorn, loves long walks on the beach and whiskey... just in case you were curious.