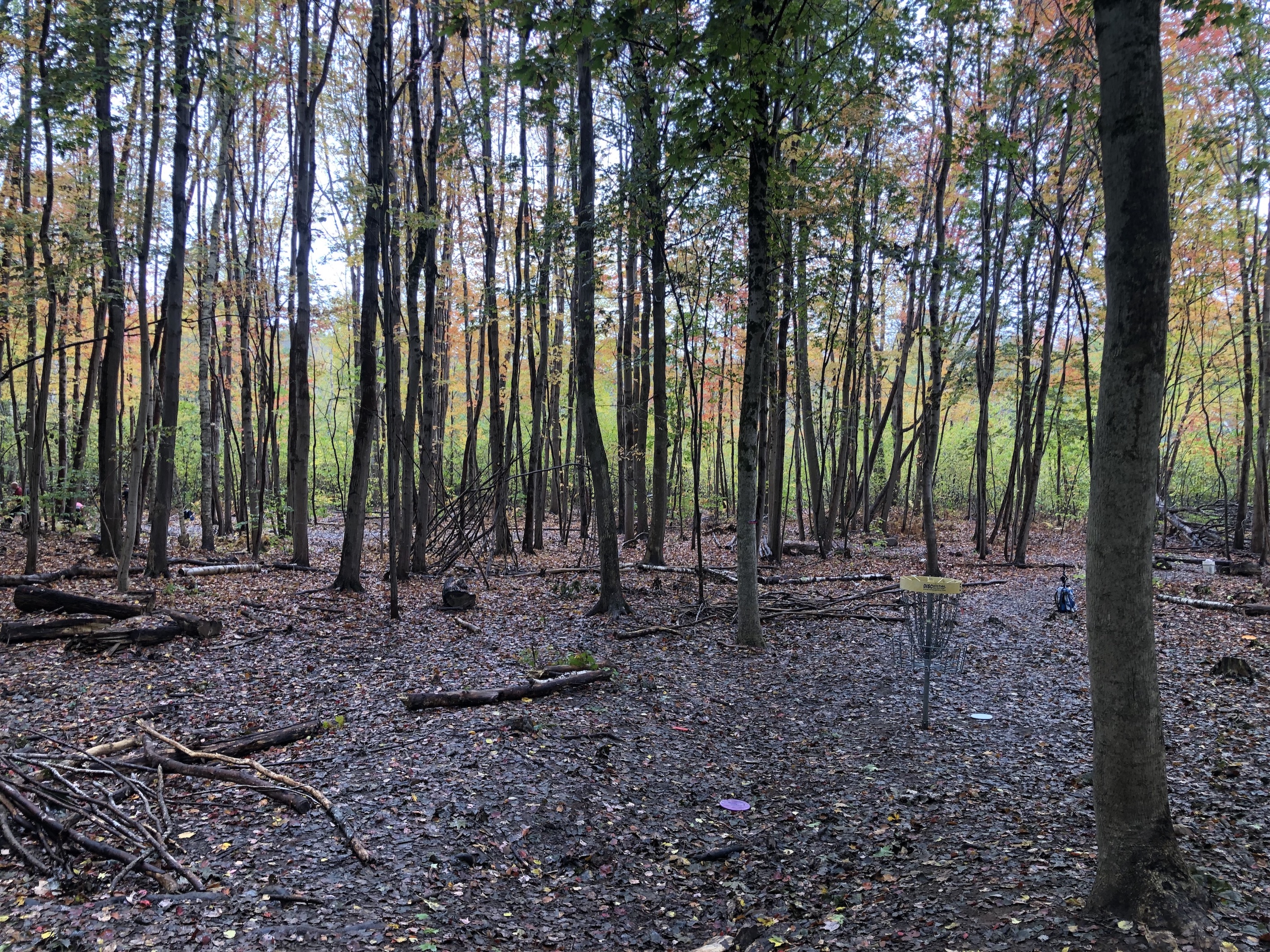 Sometimes all you need in life is a little bit of time surrounded by the people you love playing silly games throwing discs through the air. At least that what does it for me. It's impossible to deny the beauty of fall in the Maritimes, no matter how heartbroken and heavy you might feel. If there is a heaven I sure hope it is some version of a beach in August on Prince Edward Island or a disc golf course in the fall in the Nova Scotia valley. If you were one of the lucky people to play the Iron Leaf this year I hope you got to feel the overwhelming joy I felt. I am almost certain you did.

The Iron Leaf was the brain child of the original 'Bush Whackers', probably the Maritimes second disc golf club (Next to Gogan's Greens). This tournament has been going on in some form since at least 2013 and has always been a fan favourite. It has slowly evolved during those years. I don't believe we have ever played the same layout twice (although I think this year we may have found our sweet spot). The most recent iteration has been a 24 hole layout that blends the traditional New Minas 'park holes' with 5 open field holes and the most iconic finishing hole on our tour- the dreaded island hole 24. Players must navigate ups and downs, both physical and mental to come out on top of this event. 72 holes test even the most devoted of our disc golf enthusiast. It's rare that anyone can escape all three rounds without at least one crushing defeat. Throughout the years the level of competition has risen steadily to a point now where it may be the toughest event to win. Despite many frustrations and epic blowup holes, if you asked most players they would start again this weekend and do the all over. There is just something about it that makes it so wonderful it really feels like a can't miss event.

You can hear echos of the cheers for those folks who finish their rounds early and sit on the high banks watching players try to stick the landing on the island hole. You can hear chains being rung from so many baskets in the woods that is like a sound track to an album I would have on repeat and the laughter that comes from so many cards can't help but bring a smile to your face. It's a disc golf utopia that Maritimer's are privileged to call their own. This year was as good as any we have had before.

In the end we had 97 people compete in some form. It's a true testament to the event that two people chose to play Saturday knowing they could not compete on Sunday due to prior commitments but the thought of missing it completely was too much to pass. The 95 players that did play both days were treated to a wild three round competition.

To start, with we had our strongest field of female players of the season (outside of Nationals). A full 16 women competed in two divisions, meaning close to 17% of our field was female. That is something we feel very honoured by. Our team spent a significant portion of time leading up to the event discussing ways to make this event better suited to a wider variety of players. We want each division to feel challenged by the layout and to have decisions to make, none more important than deciding if you should go for the island or not! We are certainly not perfect and we can and will continue to improve, but we are trying our best to make each division feel like they are important and their voices are being heard.

When it comes to competition it was another beauty weekend.

MA2 saw a career weekend out of Ryan Boseman. His solid weekend play was rated a full 55 points higher than his average. He didn't buckle under the pressure, playing a solid -5 under par over the last 7 holes to finish his tournament strong. It was the first of three wire-to-wire winners featured in this years Iron Leaf. The second place finisher, Jacob Lane-Moriaty, also played out of his mind averaging 56 points higher than his player rating. That makes at least two people who are incredibly excited for update day!

FA2 was another amazing division for so many reasons. To start off with the winner, Desta Shaw Naka has had a truly incredible year. Not only has she won a full six events this year, she also made this incredible video that was featured on TSN (one of Canada's biggest sports broadcasters). It will never cease to amaze me how many wonderful people are now part of the game here in the Maritimes. It's a gift that keeps on giving. In second place we had a first time tournament player in Elizabeth Phippen. With her strong performance in her debut event, we (and especially her husband) really hope to see her more often in tournament play. Third place Misha Leach saw the division's biggest improvement over two rounds, shooting an impressive 15 shots better Saturday afternoon in tough conditions. That is never an easy feat and it's an accomplishment that any player should take pride in.

In MA40 we had another solid performance by this years run away division winner, Jody Wagstaff. Jody also provided all the AM players packs with beautiful custom made towels from his Ace Pot company and was the DJ at this years Nationals players party. Overall it's been a competitive year for Jody and the rest of the MA40 division. It has been great to see so many of these age protected divisions grow. With two official aces, it was the division to be in. I say 'official' because at the start of Sunday morning our good friend and division competitor, James Brosch arrived at the course, walked to hole 13 and nailed his first shot of the day for a warm up ace. He calmly walked to the basket, picked up his only throw and declared his warm up complete!

From all accounts FA1 has grown into a healthy and fun filled division. It has steadily risen all year and now boasts two full cards full of solid disc golfers who love to blend a passion for the game with an enjoyment of good company. The division had close battles all the way through but Tanis Trainor was able to be our second wire-to-wire winner on her way to picking up her third Flickline tour event of the year and sixth overall win on the season. Tanis is another one of the unsung heroes of Flickline. Not only has she been a force on the course this year, she had done and incredible amount of work behind the scenes making Flickline's social media impact stronger, our tournament more enjoyable for females, and our trophy game more and more on point. For all of those things and more we are thankful for her impact on the game.

MA1 is turning out to have some epic battles this season and the Iron Leaf was no exception. At the start of round three, the top three spots were separated by only 1 stroke with fourth place only 4 strokes behind. In the end it was the current National Champion, Dylan Goudy who once again reigned victorious. In what seems like a regular occurrence, we are again writing about a phenomenal performance out of the 15 year old. This time is was his course record -10 and 5 straight birdies to finish the event that really stands out. Dylan has some lofty goals in the disc golf world and I think I speak for all Maritimers when I say I can't wait to see him pursue his passion. However it wasn't just Dylan that shined. The entire lead card on the final round was a collection of some of the kindest human beings you can ever care to meet in this world. They were the only four amateur players to remain under par for the entire 72 holes and they all played excellent golf throughout the entire weekend. It's a pressure cooker of a division now and we could not be more proud of the level these players have risen to.

MP40 was action packed as well coming down to the final hole. There was a 1 stroke difference between first and second place and a two stroke separation for the cash line. In the end it was Johnathan Perry hanging on for par for his first Flickline victory of the season. Michael Stoddard, who finished in second, might have had the fan favourite throw of the weekend with his 175 throw-in from the 'big island'. It's just another case of the local boy putting on a show for the people!

In MPO the pride of PEI, Chris Richard took home the Iron Leaf for his wire-to-wire victory. This is his second Iron Leaf title and second straight tournament win. This event also marks the 9 year anniversary of his tournament career, the 2014 Iron Leaf. It's been a wonderful 9 years to have Chris continue to raise the level of competition. He held off a charging Nick Martin who came all the way back to tie the event with 7 holes to play, but Chris's ace on 19 sealed the deal and put a close to another incredible event.

Next year will be the 10 year anniversary of the Iron Leaf and we already have some incredible things in the works.

The Flickline Tour Championship is coming up November 5-6 at the Hillsborough Golf Club. We will have a modified layout of 30 some (the exact number is being worked on depending how cruel of a design we settle on!) unique holes and players will play 1 round per day. Saturday night will feature a players party and dinner at the Hillsborough Golf Club starting when the final card finishes their rounds (roughly 5:30pm). Entrance to the party and dinner will be provided free of charge for all amateur players. Open players can pay for a meal separately. There will be a series of prizes for tour season points winners and other notable accomplishments from the Flickline season tour. More details about the event and party will be posted next week.

Thanks again for being a part of something special.

Just a little side note about PEI and my genuine gratitude for everyone who was a part of this event. I don't want to get too sidetracked by my own personal experiences but I do want to share just a bit with all of you. Since the storm happened I became bitter, bitter at the world, at the trees, and sometimes at people for no good reason. My bitterness surprised and shamed me a bit. I know so many people suffered but I became upset by the things I lost and it weighed heavily on me. I felt like I was promised a future with some of the forests that blew down and for them to be taken away made me bitter at the world. I am adding this because sharing and bringing my faults and feelings into the light has helped me gain perspective. The Iron Leaf was a gift, and the fact that so many people read the caddy book and respected my grief just filled me with a deep gratitude that I would like to repay. I feel like I can face my losses now and I would like to move forward by trying to be the best version of myself I can be. I know lots of other people have reached out and have shared many of the feelings I did so I am know we are not alone. Anyway... I just wanted to tell anyone who might be listening, Thank for for giving me the time and space to feel like myself again.

See you at the tour championship.