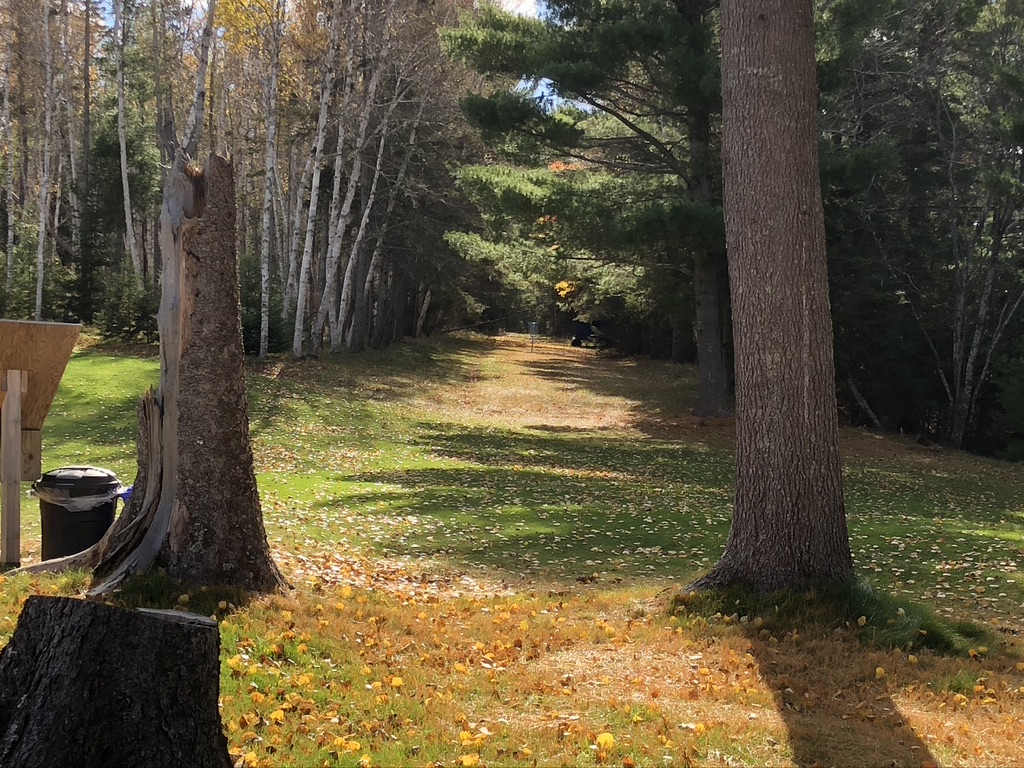 At the start of this year nobody knew what our season would look like. It was unclear if we would get to play competitive disc golf at all but after a long strange road it's safe to say it was worth the wait. The Flickline Tour Championship gave us one more glorious weekend of disc golf on the majestic Wallace River. Double digit (Celsius for those of you reading south of the border) temperatures and warm fall sunshine embraced us for the last blast before winter. It was everything a person could hope for.

Before we had even thrown our first disc of the weekend we had already claimed some major victories for the year. We had representation from each of the Atlantic provinces at our tour championship. Newfoundland has officially arrived in the tournament scene. For the first time in our region we also have a healthy Jr Division play out the entire season. These kids practice on their own time and put a lot of energy into improving their games. Not just that, but they are all quite lovely kids as well. As long as we have a jr group we have a future and by the looks of it our future is bright. It wasn't just the jr's that gave us hope, our group in Atlantic Canada now has a healthy level of competition in several divisions including FA1, 2, MA40, MP40, and almost certainly MP50 next season. To the casual observer this might not seem like much but to us it shows people are staying with the game long enough to compete with a field of their peers. After all we make this tour for our players. It's great to see so many players take part in a space they feel is their own.

As for the event itself it was pure magic. The Wallace River Golf Club is a hidden gem that disc golfers are now lucky enough to experience. Located halfway down a dirt road in the middle of what seems like nowhere is one of the best, most challenging 9 hole golf courses a person could hope to find. Couple that with the fact that there are beautiful vistas of the world famous Wallace river around almost every corner and wild foxes that populate the course every person who goes here feels a kinship with the land. We are blessed to be able to use this piece of property. This year the course matched the surrounding better than ever. It was quite possibly our best tournament course we have ever created (humble brag). The finishing hole played spectacularly. It was the kind of hole that if you played it 100 times you could still be finding new ways to attack it. Only 10 of the 60 players for the entire weekend finished under par. Most of the divisions we decided by 3 strokes or less, often times that came down to the last hole.

This event was created to cap off a full tour series in Atlantic Canada. This tour is something we had been toying around with for a few years and finally feel we are in a good position to execute. This year we had 13 events planned but were only able to host 7. The global pandemic made it tricky but our players are kind and understanding and for most part were able to role with the punches. With the constantly changing rules and regulations we heard very few complaints. For that we were eternally grateful. Someday we will look back on this whole thing and say, 'what a crazy time'. For now we are just living it.

Back to disc golf.

We always like to tell a few of the human stories from each event. We had more than couple to pick from this weekend. No less than 3 players told us that they had one round here that was among the best sporting moments of their life. They got to experience that feeling when everything clicks and your game feels smooth. That harmony of body and spirit is what we are all going for so when you get it's nice to relish in that glow for a least an extra minute or two. We had 2 first time winners as well. Chris Bourque and Joey Crawford pulled out the MA1 and MA2 divisions respectively. Both jumped to early leads and held on for the 3 rounds, playing well above their ratings. From as far as we could tell both players put together their best weekend of disc golf on a complete course. The other player that is worth noting is Tony McDonald. At first glance his 9th place finish might not seem like it warrants a comment but when you look closer it's really the third round that is notable. After a tough Saturday, especially on hole 7, Tony fought back to shoot the hot round for his division on Sunday. We all know the mental fortitude it takes to come back strong after playing below your expectations on the Saturday. In fact Tony was one of 3 people to post a round 10 strokes better than a previous round, credit also goes to Matthew Burnet, and worlds bound Jr champion Antoni Richard.

Even division had its own battles. MP40 had a come-from-behind victory for Adam Dowe, MA40 saw a dominate season come to it's logically conclusion for wire to wire winner Matthew Sullivan. Nathalie Deveau and Lysiane Soucy cruised to victory for this event and in turn taking home the season points championship as well. The final division came down to the wire with a thrilling victory planning out for Kyle Reid. Every player on the final card was either in the running for first or the cash line when they stepped up to play hole 20. In the end a well deserved par was enough to take home victory for the smooth throwing Reid. It was everything a course designer dreams of; watching each throw count on the last hole. When the final chains were rung it put a cap on what was one of the strangest seasons any of us could have imaged.

As mentioned several times before creating this tour was meant to showcase the amazing courses and people we have in Atlantic Canada. Each of the tour champions received (or more accurately will be receiving) a fantastic prize meant to reward their season play. The biggest of those prizes went to the MA1 champion, Andrew Clarke. Andrew received 6 DiscGolfPark baskets for his new course set to be open in 2022 in eastern PEI. His tour championship was the result of solid play for the entire season and we were thrilled to see him go home with the hardware. Next year we hope to crown another champion who is equally as deserving... maybe it will be Andrew back to defend his title?

As for next year we have already begun the planning. There are a couple notable changes that will be made for the season; the two biggest being the players packs, and the dates. First we will no longer be giving away discs at our events, instead we will be offering our players 1 signature item worth as much or more than the entry fee into the event. We will have tour series discs for sale at the event and winners for each division will be given in store credits to Chain Reaction Disc Golf

Our tour will consist of 8 events, 2 in each of the Atlantic Provinces:

As much as we hate to see Wallace go the Hillsborough Golf club has offered to keep the kitchen open for us and have the golf course open only to disc golfers for the last week of the season. We will have a players party in the club house that weekend to give away all of the 2022 prizes we have. Next year we will give away prizes for the top 3 season points finishers.

One final note before we go there are several people we would like to thank. Flickline is team of people who all put forth contributions to make these events go. We wouldn't have had nearly as good of a time without Kris Moulton and Chain Reaction Disc Golf. It's hard to believe that Kris has only been a part of this game for a little over a year. In fact it was just last year at this event that we became acquainted. He and his company are poised to be the one stop shop for discs in our region for a long time.

Another name on the list of unsung hero's is Luc Richard. Luc is our stand in for TD'ing lots of the places Ben can't get to. He also does a lot of the 'day of' behind the scenes and logistics. Luc makes a lot of the small problems disappear and we are thankful for people like him.

This beautiful website we are all reading on today was created by Pierre Landry as a side job. To say it exceed our expectations is a major understatement. We are so proud to have something that is functional and aesthetically pleasing. Every time we post something we are reminded of how great it is to have people like Pierre working behind the scenes on a common goal.

Finally we owe a huge emotional thanks to our TD-on-paper, Duncan Dixon. Duncan has been a huge driving force behind the scenes as well. He does all the registration, TD reports, and score submissions. Where Ben is inept Duncan excels and that's what makes a great team.

Lastly all the players that represented team Flickline and everyone who took part in any event we put on this year. Without you there is no tour and no growth to write about in our region. The biggest thank you of all goes out to all of you.

The best that we can offer is to come back next year bigger and better than ever. We will spend the winter planning you get practicing and we will see you all together in April!